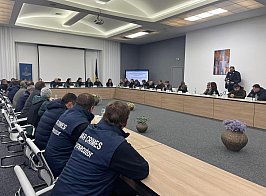 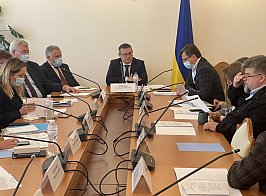 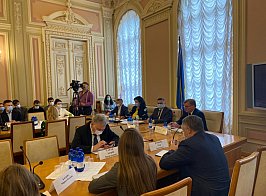 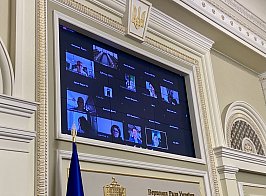 The Revolution of Dignity in 2014 in Ukraine ultimately resolved Ukraine's geopolitical choice and defined the development of our country as a leader in democracy, reform, the rule of law and respect for human rights in Central and Eastern Europe. A successful Ukraine remains the only hope for Russians, Belarusians, Armenians and other peoples in the post-Soviet space to successfully build democracy and prosperous societies in their respective countries.

Despite the Russian aggression against Ukraine in response to the democratic European and Euro-Atlantic choice of the Ukrainian people, despite the attempted illegal annexation of Crimea and the occupation of certain areas of Donetsk and Luhansk regions, despite ongoing armed aggression and war crimes by Russia, as well as attacks on our strategic infrastructure, and despite the daily killings of Ukrainian citizens, Ukraine does not betray its choice.

We are grateful to the European Union, the United States, Canada, the United Kingdom, and other democracies for supporting Ukraine in countering Russian Federation’s threats to our statehood, territorial integrity, and sovereignty.

At the same time, we note with deep disappointment the ongoing preparations for the launch of Nord Stream 2, which is another attempt by the Russian Federation to use energy as a tool of hybrid warfare against the West. It poses a direct threat to energy security in Ukraine and Europe, and compromises diversification of energy supply to European consumers.

Nord Stream 2 is a purely geopolitical project aimed at making Europe dependent on the Russian gas monopoly. Moscow is implementing this project with a view to exacerbating and strengthening discordances within the democratic and European communities. The Nord Stream-2 project is also a tool for projecting the military force of the Russian Federation against NATO countries in Russia's priority Baltic Sea.

From its very beginning, Nord Stream-2 was not an economic project, as the capacity of the Ukrainian gas transmission system makes it possible to increase gas transportation to Europe by 2-3 times. At the same time, Nord Stream 2 creates real obstacles to the diversification of energy sources and routes to Europe. Needless to say, Russia's strategic infrastructure projects pose significant corruption threats to European democracies.

The project creates conditions for Russia's escalation of military aggression against Ukraine, as well as the continuation of a hybrid war against the EU and NATO. The commissioning of the pipeline will remove Ukraine's important lever to contain Russia, making it vulnerable to the Kremlin's anti-democratic and anti-reformist vision of Ukraine. This Russian pipeline threatens the national security not only of Ukraine, but also of the whole Europe.

We hear assurances from our partners that Ukraine will receive some compensation in exchange for agreeing to the launch of Nord Stream 2, as well as our partners' willingness to take tough action if Russia increases its aggression against Ukraine. However, history has repeatedly proved otherwise. Thus, the 1994 Memorandum on security assurances in connection with Ukraine's accession to the Treaty on the Non-Proliferation of Nuclear Weapons (Budapest Memorandum), which was in particular signed by the United States, Great Britain and France, and under which Ukraine voluntarily renounced nuclear weapons in exchange for security guarantees, did not stop the Kremlin from invasion.

We declare with disappointment and concern that the failure to resolve the issue of Ukraine's membership in NATO and the EU, the lack of effective security guarantees, the de facto embargo by some EU and NATO member states on defense arms supplies to Ukraine, pacification, and concessions to Russia on implementation of geopolitical projects, in fact deny the right of Ukraine to self-defense.

In this context, we recall and share the position of the European Parliament, repeatedly expressed in its resolutions, on the need to reduce the EU's energy dependence on Russia and call on the EU institutions and member states to immediately stop construction of the Nord Stream-2 gas pipeline.

Therefore, we call on the United States, the European Union and, in particular, Germany to stop the construction and further commissioning of the Nord Stream-2 gas pipeline. The democratic world must demonstrate to the Russian aggressor the unity and the strength in defending its fundamental values. Ukraine demonstrates this every day by defending the Eastern flank of Europe.